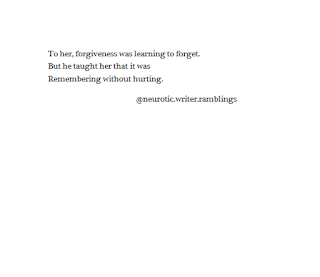 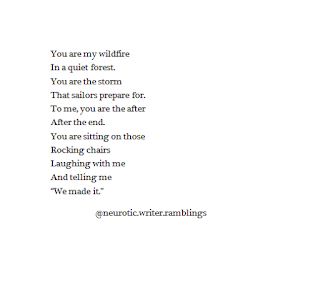 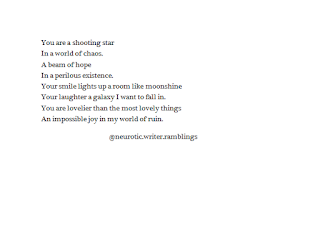 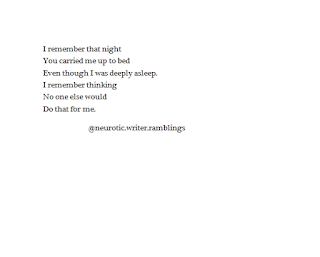 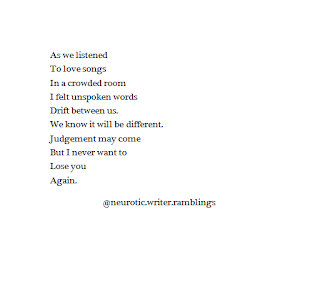 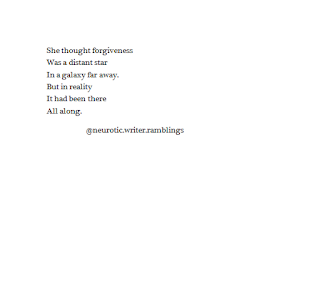 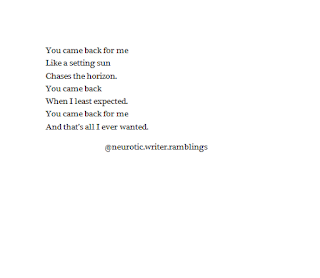 I hope you liked my poetry! Please feel free to follow my Instagram and Facebook page or subscribe to my blog. Until next time, love Vee x
Posted by Vada Green at 03:00 No comments:

Hey guys! ❤ I hope your weekend is going well. This week's blog is all about #Bookwormproblems. I've asked some of my fellow readers what some of their bookworm problems are. Here they are... Some of my bookworm problems include having a long TBR list where I don't have time to read everything; waiting for new releases, trying to find fan bases for stand alone books I love and not being able to find a bookmark when I need one! 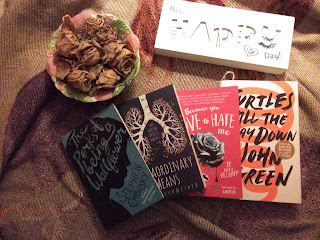 That sounds like an insane amount of books! But I think we can all sympathize with Tricia.


Jen Oddo (Instagram: starcrossesbookblog) shares her bookish problems: "Being afraid that I'll NEVER make a dent in my TBR. I tried to put a limit on not having more than 500 books in my TBR. HA, yeah right. Then I thought 700 would be a good number to keep it at. Uhhhh that didn't happen either. And now I've just given up trying to keep a limit on it."
I think everyone is going through the same problem of having too much to read and having too little time! It may be silly but I actually become anxious when I think I won't have enough time in life to read all the books I want to. 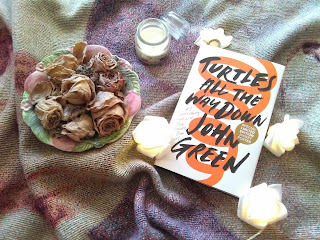 Simone K (Instagram: simmyk_bookstagram) says one of her bookish problems is "not being able to get comfortable while reading." This is so true! My hands start aching or I have to turn over in bed every few pages. It's extremely irritating but a bookworm has to do what a bookworm has to do. Kate (Instagram: bitchybookshelf)says her bookish problems are: Those are some really important ones. I know I hate when I read spoilers online and don't even get me started on library fees. I hope you guys liked this interactive blog and I'll see you next week! Love, Vee x
Posted by Vada Green at 03:00 1 comment:

What Draws You To A Book?

Hey guys, it's Vee here. I hope you are all having a relaxing weekend. In this week's blog I'm going to discuss what draws me to a book and I will be asking you the same question!


When choosing a book or just randomly scrolling through Instagram, the cover immediately draws me in - is it bright, or dark? Does it have photographs on or artwork? Is the title clear and readable? The saying goes "Don't judge a book by its cover" but I think that's exactly what we should do!  The cover is important to draw the reader in - it isn't as important as the writing itself but it's a step to get me to read the book. If a cover is too plain or too heavy, too dark or too bright, the chances are I won't buy it unless I know who the author is or the synopsis intrigues me. I will often go around Waterstones and look at all the wonderful covers, read the synopsis and then read the reviews online. 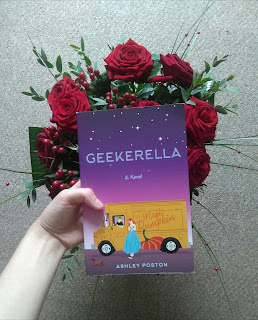 Now, this is also an important one as the blurb has to engage the reader. If the blurb is a conversation or an extract from the book, I won't want to buy or read it as I like to know the plot.

Genre is also a big factor with me buying a book; I'm a big YA contemporary and LGBT reader. I sometimes read fantasy but it has to be a book I've been eyeing up for ages. I don't enjoy mysteries, horror or adult fiction.

I don't tend to read as many series now as I used to as a child; I enjoy trilogies the most as these aren't too long or too short. Stand alones are best as I sometimes pick up a book and it's the second one in the series and I can't be bothered to read all ten thousand books following it. I also don't want to be spending lots of money on a series I may not enjoy when I really could be buying books from authors I love. 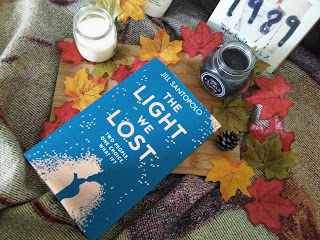 I like to try new authors' work but most of the time I will buy from the writers I know I like such as John Green, David Levithan or Rainbow Rowell.

What are some factors you consider before buying books? Let me know in the comments!
Don't forget to follow my Instagram: neurotic.writer.ramblings
Posted by Vada Green at 03:00 2 comments:

Hi guys! It's Vee here ❤ In this week's blog I want to talk about the pros and cons of reading new releases. Maybe some of you will feel the same as I do. I'd love to hear your pros and cons!

It's great when the next book in your favourite series is out or you've been waiting for years for the next John Green novel. Fangirling is great - especially on Instagram where so many people connect and get excited together. It's a really wonderful thing to share the excitement of a new release with your book pals and maybe even go to signings. 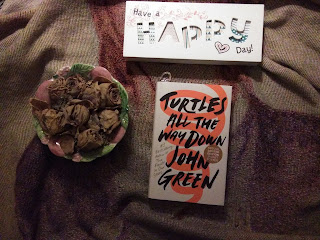 Getting to Read the Book Before Anyone Else

When you buy a new release, it's a rush to the finish line to see who can read the book first. Everyone wants to be the first to have read it, otherwise they'll be spoilers! Once you've stayed up all night on the high of reading, you'll be exhausted but proud. So really, it's half a con and half a pro.

As a book blogger, reading new releases is important as loads of people are debating whether or not to buy it and your review could help make their decision. And that's a wonderful feeling to have someone say they bought a book because of your review.

As a full time apprentice and a slow reader, I can't read new releases very quickly and there's an awful lot of pressure to get the next review out. In reality, we are the ones putting pressure on ourselves to do well. But having to keep up with all these new releases is a lot of work and time and energy. 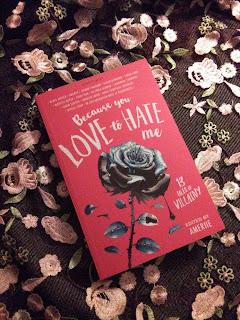 New books are expensive, guys. Let's be real - you could go down the library and take out a book for a couple of weeks. It may not be the new release you wanted but at least you won't have to spend £12 on that hardcover you wanted. You can wait until it comes out in the library.


Let me know your thoughts on this below ⇓ That's it for now. Love, Vee ❤

Daniel Yetman, the author of Since You Lost Your Brother has agreed to let me interview him regarding his writing. You can find out more about Daniel and his books here. I’m very excited to feature Daniel on my blog and I hope you enjoy the questions/answers! 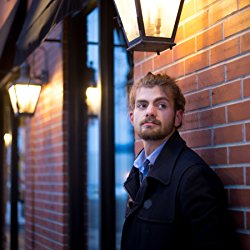 What were some of your inspirations for writing? Or who?

I’ll try to be as honest as I can be while still trying to protect identities. Right after high-school, my best-friend lost her father and a few months later this girl I had a crush on also lost her father. I had never lost anybody of significance from my life so I felt pretty helpless watching them go through what they were going through. That was the main inspiration for the title of the novel. I have strong ties with South Korea as well which is why the book takes place there. After my undergrad degree, I moved to Seoul to teach English for a couple of years, and last summer I went back to write this story and revisit all the hidden corners I had discovered. I was also going through a break-up while writing which definitely helped fuel the passion I hope comes across in the story.

How do you cope with writer's block?

I have been pretty lucky and haven’t had to face a lot of writer’s block. I usually have a few stories on the go at the same time so when I get stuck in one I switch to the other. My strategy for writing is to bang out a first draft as quick as I can and go through many revisions, each time revising a different part of the story. Usually the first edit is a deep edit of the plot, the second edit is for continuity, the third edit is for sensory detail and dialogue, the fourth edit is for language and small details, and the fifth edit is basically copyediting.

Your book, Since You Lost Your Brother was beautifully written and is raw with emotions. Did you write it all down and edit it later or was it spur of the moment writing?

I had the idea for a collection of micro stories last spring and spent a few months plotting it before starting it over the summer while I was in South Korea. I started the first story in July on the subway train heading to my hostel from the airport, and I finished the last story on the subway to the airport when I was leaving in September. I wrote the entire first draft on trains, usually while leaning against a railing near the doorway while receiving a few curious glances. The recurring premise throughout Since You Lost Your Brother of having to let go of somebody you’re in love with was still fresh at the time so the writing came quicker and easier than usual.

Do you have more plans to write any more books in the future?

I’m currently finishing up my thesis for my master’s degree in fine arts which is a novel about a sprinter who gets injured before the Olympics. I’m also working on another project similar to Since You Lost Your Brother which I’m hoping to release in the fall. I enjoy writing about relationships and unrequited love so these topics will likely be reoccurring themes.I also strive for authenticity, not censoring myself because it’s safer. 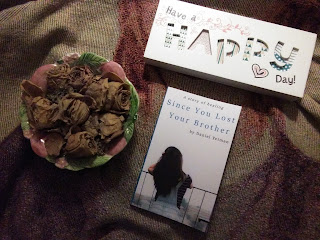 Do you have a favourite book or author?

It’s hard to pick one of either, but if I were to throw out a few authors I would say Junot Diaz, Yann Martel, Ernest Hemingway, Haruki Murakami, and Leo Tolstoy. As far as favourite books, I would list “The Brief Wondrous Life of Oscar Wao,” “Anna Karinina,” and “Life of Pi.” I am actually living in the same small city in Western Canada as Yann Martel, but I’ve yet to meet him yet.

If you could give one piece of advice to your readers, what would it be?

Vada Green
I'm an anxious, neurotic mess that likes to write, worry, read and travel. Follow me on my adventures in navigating the unknown.